Photo of the Year - Drumtrodden Stones and Rainbow

Visited the standing stones and cup and ring marks at Drumtrodden near Stranrae in Scotland. Just as I was about to leave the stones, an excellent rainbow appeared. 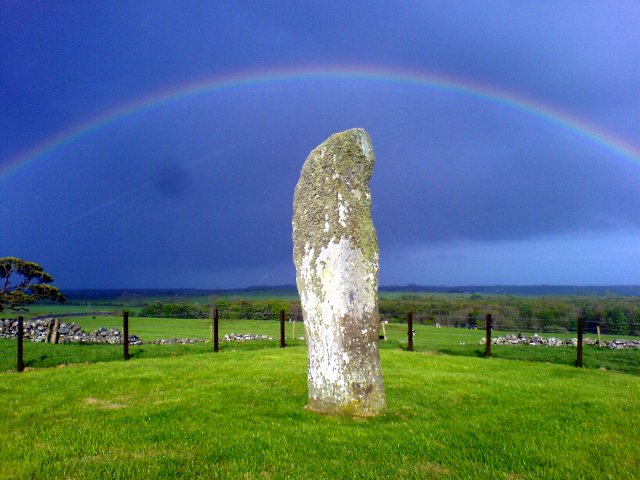 I've wanted to visit Japan for a long time, I always figured it would be the closest I could get to visiting an alien planet, combining high technology and a quite different culture and language to my own. And, of course, in some ways I was right and in some I was wrong. The toilets, for instance, are very high tech. Here's the instructions for the toilet in my hotel room:

The food is lovely (see below) and in some ways the culture is very different - the Buddhist temples and Shinto shrines, the amazing lights of Tokyo, and the difference in signs, symbols and legends. In other ways it's much like any well off European or North American country - efficient public transport, shops, cafes, hotels, and tourist sites. I was lucky in that I got to visit four quite different parts of Japan: Matsushima - One of the "four great classical views" of Japan. The name means "Pine Islands"

Tokyo - Japan's capital and where the bright lights are

The Ukulele Orchestra of Great Britain

I saw these guys back at the Big Chill in August 2006 Tonight, they're at the Town Hall in Birmingham, or Frankfurt as they initially mistake it for (due to the adjacent German market). When I heard they were playing here, I was so please I booked tickets for 15 other people to come too! A stunning show, and even my friends who'd never heard them before loved it. The music is good, and the humour fantastic! Highlights for me were a great version of Shaft, with some lovely word play; Wuthering Heights %EXT%; Teenage Dirtbag (A Christmas themed song we were reminded, just before the first line... "Her name is Noel"

groan!); and of course their world famous Smells Like Teen Spirit %EXT%, a song also covered by popular beat combo Nirvana. So much good stuff! Verdict: If you get the chance, go see them, otherwise have a gander on YouTube %EXT% then buy MP3s and DVDs on their website.

I saw Kate Goes... %EXT% several times during the year, and they really should have been the best music of 2006, but as I didn't get round to writing that... Kate Goes... To Wonderland

Kate Goes... to a Family Function

Check them out on MySpace %EXT% -my favourite song is Heartbeat.

The Crowd6 %EXT% gallery opened in April with an exhibition including videos of sea-monkeys - you can't do better that that! It's an artist led space in Bearwood, set up by local artists out of the "Margaret St" school of art. It's mounted a number of exhibitions over the year, and fills a much needed niche for artists at a particular stage of their career. Unfortunately, their subsidised lease is up and they are now looking for new premised - hopefully nearby. Best of luck to them for 2008.

Something I didn't write about in detail, as it was kind of secret at the time. This highly interactive performance curated by AAS involved members of the public signing up to a "training scheme for spys". It ran over the course of about three weeks in April, as part of The Event %EXT% festival. I was "recruited" by being handed a mysterious flyer, a little like those ones which promise well paid work with little effort. It said "Are you one of those people who have brains not just qualifications". I contacted the email address given and got a massive personality questionnaire back in return. It took about 40 minutes to complete! Once I'd sent it back, I was told I had been accepted, and a little more about the scheme. I was to go to an art gallery in the city centre where my contact was under cover as an invigilator. After a brief look around, I used my code phrase: "I'd like the special please.". The response was "I cannot give you the special, it is only for special occasions". I responded: "It's my Birthday". "That is a special occasion" was the response, and I was in. A short briefing session followed, with a number of secret signs, and the creation of a fake identify. I became Boyd, "Psychic to the Stars" (my own choice) with a couple of special abilities and secrets. My first mission was to exchange a package with a stranger in a cafe. I was shown a blurry photo, and given a package to take. This was quite exciting! I headed down there, not thinking at all about whether I was followed, or if there was any surveillance at the meeting point. These attitudes soon changed, as my next mission involved intercepting an agent on their way to a meeting, and doing covert surveillance on them including getting photos of their meeting. Later I found that I had been spotted, but my skills improved over the course of the game, and I came within a whisker of being the top agent overall. As the game progressed, a number of bizarre objects surfaces - hollowed out books, mysterious vials, numbered cylinders. Other agents were equally mysterious - were they traitors or true. What about Control? Should I trust them? The whole exercise made me more aware of my surroundings, the people and the city around me. My favourite mission seemed almost impossible at first sight. I received a text from Control, asking me to get into a hotel room on the top floor of one of the hotels on Broad St. Working with another agent I needed to bring back photographic proof of the missions success: photos of the room and the view of the street below. After discussing various options for how we could accomplish this, we put our plan into action... and it worked perfectly. We spend about 20 minutes in various rooms on the top floor without any problems from security or hotel staff. But how did we do it? Well, that would be telling - how would you?

The Smile Off Your Face

I experienced this during my visit to the Edinburgh Festival. An amazing, moving, piece of one-on-one performance which starts with you being blindfolded and being placed in a wheelchair with your hands bound. In this vulnerable position of sensory deprivation, you disappear off into a secret world hidden behind a curtain. Sounds, smells and spoken word combine to generate a series of emotions and revelations which leave you with a depth of insight into yourself and your life. Totally recommended. The theatre company is called Ontroerend Goed %EXT% but I'd strongly suggest you don't read any more before you've been to see the performance).

Again, a contender for both 2006 and 2007, so I've snuck it in here. I'd seen Cymbeline back in Sept 2006 at The Swan in Stratford, and vowed to see it when it came to Brum, but I hadn't been keeping an eye on the programme at the Rep. Luckily I realised just in time, and decided to book in for the final matinee performance, and was so glad I had. Kneehigh Theatre %EXT% are really a superb company. Their Tristan and Isolte in 2005 was great, and Cymbeline even better. I think the band made it for me, plus the mixed treatment as tragedy and comedy, which gave it a great depth through contrast. (From: Blog Sat 10th February 2007)

I visited Japan in March 2007 and loved the food. I was already a fan of Sushi, but I discovered much more about Japanese cuisine during my trip. One big advantage of Japanese restaurants and cafes is that the majority have very accurate plastic models of the food outside. Here's the breakfast I had at a Ryokan with lots of yuba and also a bowl of tiny little white fish! (Blog Fri 9th March 2007)

I've got more pictures of Japanese food on Flickr %EXT%.

We Want Your Soul!

Nice work above a cash point in Moseley:

It reminded me of the great track Lost Souls in the Supermarket by McSleazy - unfortunately, I can't find it online at the moment. (From: Blog Tues 31st January 2007)

I spotted this nice stencil in King's Heath.

It snowed on 8th of February, and someone at Birmingham University build this Snow-Clocktower! Pretty cool

Best Representation of an Elephant

Winner of the Best Representation of an Elephant prize this year was this lovely specimen found in the Nikko temple complex in Japan.

I saw Fake Psychic Derek Acorah in January - the transcript gives some insight into how he works his "magic".

In May I visited the north of Ireland including Tory Island (also known as Toraigh Island) which is a small and isolated island off the coast with wonderful wildlife and ancient relics.

Rowing round Birmingham in a Fridge

As part of the Fierce Festival, I rowed around the Birmingham canal system in an old fridge!

Day of the Figurines

I enjoyed playing Day of the Figurines , a play by SMS game designed by the group Blast Theory in which our tiny figures moved around a virtual world in Wolverhampton Art Gallery.