Luckily, the weather was good today, the first day of the Moseley Folk Festival. The queues for the beer tent were huge - about 35 minutes the one time I went. Still, the festival is so small that you can get a good view of the stage from the beer queue. The act I liked most was: The Accidental %EXT% (not to be mixed up with The Accidentals), nice anti-folk like songs with good lyrics and vocals. I also caught the very last song of Lucy and the Caterpillar %EXT% - I want to be an Animal which sounded like great fun!

Staithes is a wonderfully picturesque seaside village not so far from Whitby and near to the highest place on the English coast. This means that it's a steep walk down the single street from the car park at the top of the cliff. The houses are painted in various bright colours and accessed by tiny meandering passageways and steps. There's a small but nice beach, and some excellent scenery. 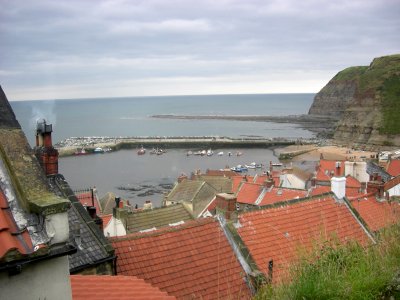 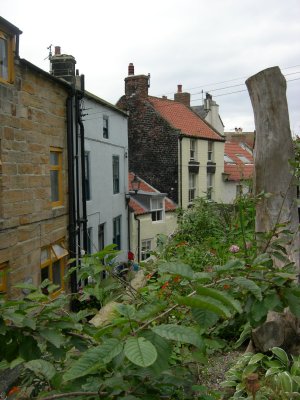 I stopped off at the Seadrift Cafe on the harbour front for some of their "Cobble Cake" (as recommended by the owner of the B&B I stayed at) and it was great: moist and fragrant with spices. They also did good sandwiches and snacks. 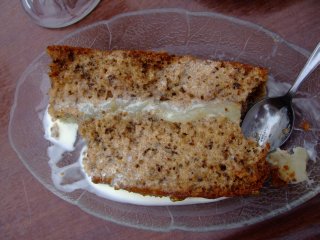 The main streets of Whitby were heaving with lots of people, mostly from North Yorkshire, or the North East. I don't think I'd like to live somewhere with so many tourists, but the volume means there's plenty of cafes, winkle stalls and fish and chip shops about. I went for Fish and Chips, not at The Magpie - right in the busiest spot, with long long queues, but at a place the other side of the river which was listed as "One of the top 5 chip shops in the North of England" - the rather unlikely sounding "Mr Chips". One of the things you don't want with good fish is to have it straight out of the fryer, it needs to rest for a while (and drain off any excess oil), and despite the queue of about 10 mins, the fish and chips were faultless. No wonder they're won a string of awards! I also explored the town and went up to the Abbey, got some beautiful views of the town and harbour. 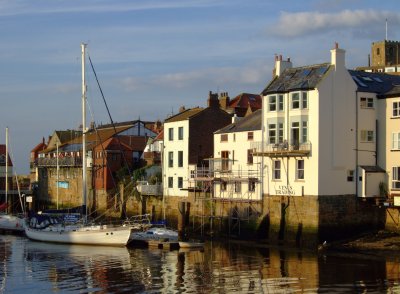 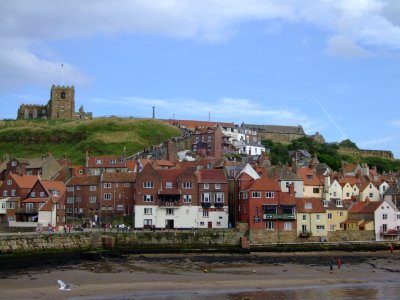 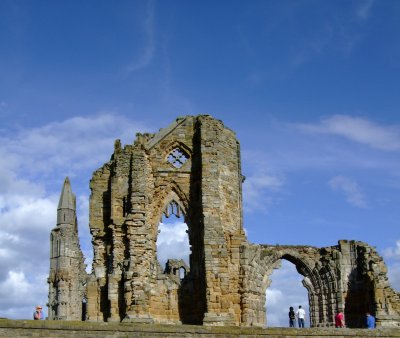 I got the train and coach to Whitby - 4 hours, 13 mins which isn't too bad considering it's right up on the North East coast. There is a train station in Whitby, but it's only served from Middlesbrough which adds an hour to the journey - I guess you can blame Mr Beeching who decimated our railway system %EXT%. I changed from train to coach at Malton, and the bus took me through various pretty North Yorkshire towns such as Pickering, Thornton-le-Dale and Goathland. There were quite a lot of people taking advantage of the free-bus pass for the over 60s, hopping on the first bus which came and seeing where it took them. The route went over the moors to Whitby, which were covered in purple heather - it's hard to believe just how purple they were! 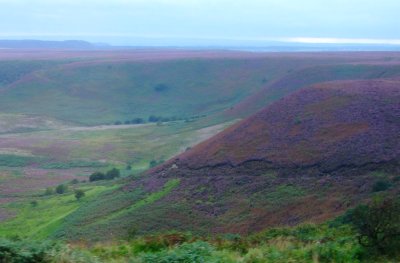 Heather turns the moors to purple As it's a Bank Holiday weekend I had problems finding a B&B, even a few weeks in advance, but after ringing about a dozen I found one with a cancellation - the Brunswick B&B %EXT%. I'd no idea what to expect, except that it was very central and about 3 mins from the coach stop. The place was lovely - the room was light and airy and the owner welcoming and friendly, the exact opposite of the stereotypical "seaside landlady". Breakfast included bread from an artisan bakery and wonderful home made fruit salad. I'd definitely recommend it. 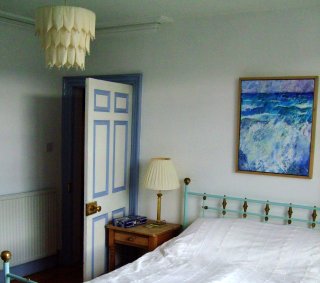 This was the third Birmingham Opera's show I've seen, the others being at the ICC late last year and a great Don Giovanni at an old bank. The venue for King Ideomeneo tonight was an old rubber factory in Ladywood/Springhill. When we arrived we were stickered with a dayglow horses head which marked us out as Trojan prisoners, and left to mill in a striking covered loading bay. After a few minutes, we moved inside the building and waited while being surveyed by what looked like prison guards. Suddenly, they made a move and grabbed one of the audience, dragging him off kicking and fighting. In fact, his struggles were so fierce that another audience member was almost knocked to the ground! Presumably the first guy was a "plant" but the other seemed quite supprised and put out - as you would be! Guards shouted at us and we crowded to squeeze through a narrow door into the main factory space. Inside we found a large hill built out of earth, a grove of orange trees and an altar. On a small hill, a pair of giant mirrored walls formed the backdrop for the first aria. The story is that greek King Ideomeneo, returning from the wars, only survives by making a deal to sacrifice the first creature he sees on land to Poseidon. As luck would have it, that turns out to be his son. However, the King is not so keen to go along with his side of the bargain, which brings a run of bad luck for his kingdom. For the first 50 minutes or so, we stood, and moved around the space, watching as the action moved around the large factory space. After this, the director took pity on us all and the cast/chorus of 100s handed out blankets and directed us to sit up on the large hill. The performers moved through and, at some points, sang within the audience which gave a real feeling of engagement. Luckily, the performance was in English, and was relatively easy to follow. Had it been in German or Italian I'd have been pretty lost. The set was stunning and the whole experience exciting and uplifting. If you ever get the chance to see Birmingham Opera perform, grab the tickets quickly as they sell out fast! 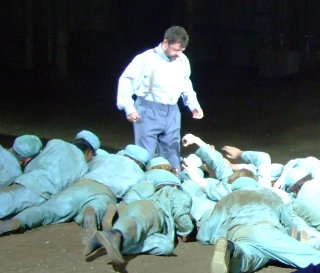 King Ideomeneo all at sea 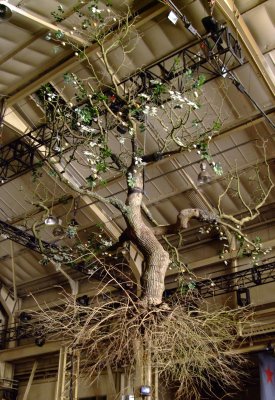 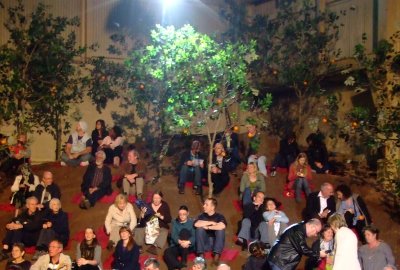 Small Hill Prev: Blog July 2008 1 Year Ago: Blog August 2007 Next: Blog September 2008 Contact me: Website (at) Andy Pryke.com, try use a subject which will get through my Spam Filter! I've been having spam filter problems, so if you haven't had a response, I'm really sorry, please try again! See Also: Web Changes for other recent updates, All Blog Pages for previous blogs. You might also want to read other Birmingham Bloggers This is my blogchalk: United Kingdom, West Midlands, Birmingham, Moseley